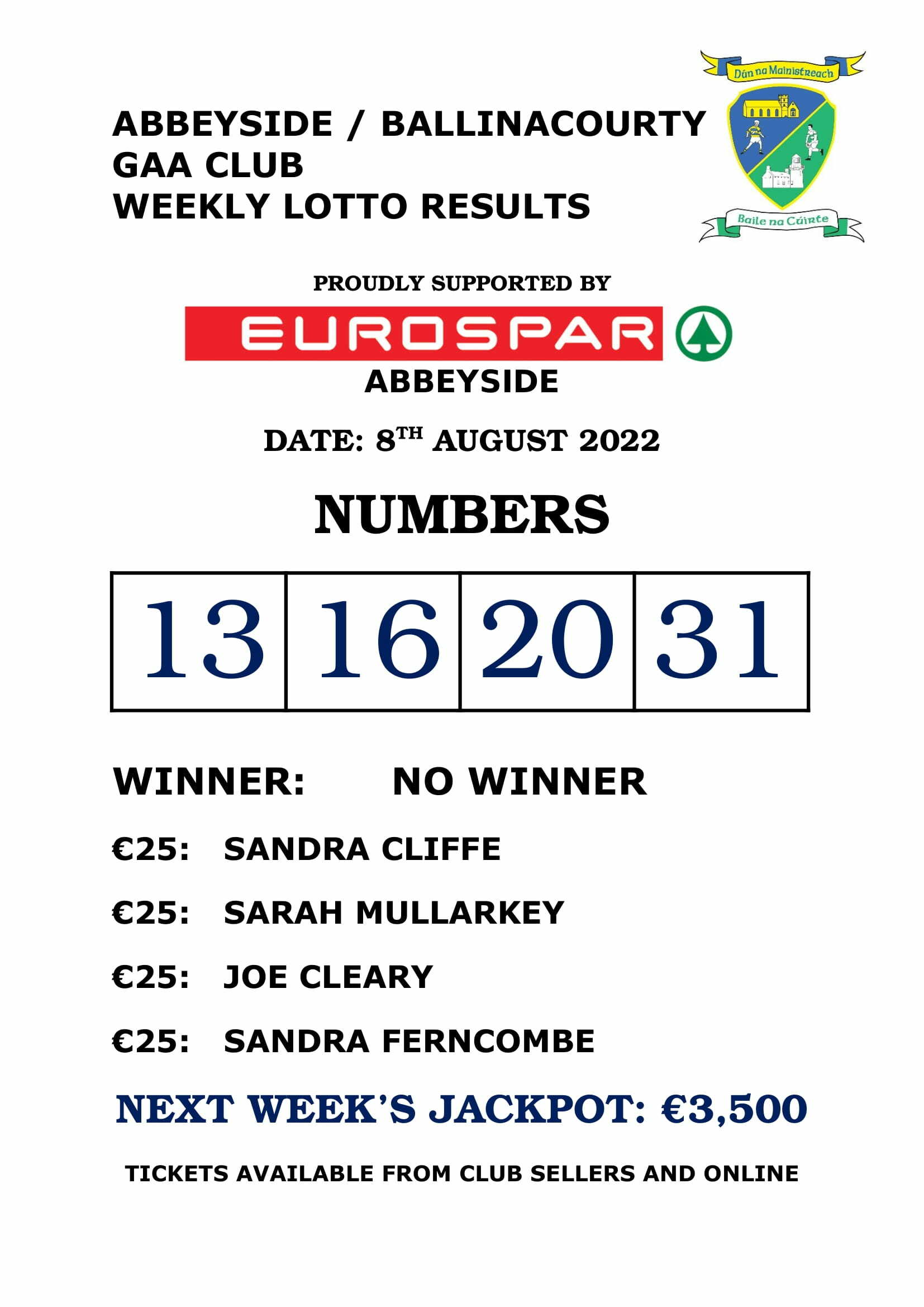 Our weekly lotto takes place on Tuesday night next. Next week's Jackpot will be €3,500. Tickets can be purchased from club sellers and by clicking on the following link - https://abbeycourtygaa.clubzap.com/categories/lotto/products

Following defeat to Mount Sion in the 1st round our Seniors are in action again this weekend.

The Junior teams had contrasting fortunes in their respective championship outings last weekend, with the A team scoring a great victory over Colligan whilst the B side went down to Tallow.

Western Junior ‘B’ Hurling Championship Group B Round 1

Western Junior ‘A’ Hurling Championship Group A Round 2

This Friday evening the B championship continues

Western Junior ‘B’ Hurling Championship Group B Round 2

Having went down to Ballygunner the Minors are in action this week with a home game versus De La Salle this Wednesday.

Please make an effort to get out and support all our teams.

After getting 3 more winners in last month’s draw – Pajo Lanigan €1,000, Larry Cliffe & David Whelan €100 each, the next draw takes place Wednesday. Hopefully we can continue our lucky streak and once again we’d like to thank all our sellers and those who support the draw.

Last Friday (5th August) our U15 division 4 team hosted Tramore and despite a valiant effort, didn’t come away with a result. For this team, who are mainly made up of U14 players, this year is about gaining experience that will help prepare for next season when they play on their own age.

The division 1 boys most recently played Ferrybank/St. Saviours and fought really had to take the victory by a single point. Neither of our U15 panels are in action this week but the preparations for the next round will continue.

After recording good wins against Kilrossanty (div 4) and Mount Sion (div1) neither of our U13 teams were in action last week, but the work hasn’t stopped. They continue to prepare for the next round of the championship. On Monday 8th August they’re on the road as the division 4 boys take on De la Salle and division 1 boys head west to play Lismore. Keep an eye on social media for updates.

The U12 division 5 boys have had a couple of weeks without matches but they line out twice this week in the hope of retaining their unbeaten run. They will face very stiff challenges from De la Salle (Wed 10th) and St. Pats (Fri 12th).

The division 1 team haven’t had a league match since they beat Mount Sion a couple of weeks ago but they continue to train well and have been hitting the road taking part in tournaments and challenges.

Our U11 hurlers have also been in action recently. The division boys had a busy week last week as they hosted a strong Lismore team on Tuesday (2nd Aug) but lost narrowly after a really good performance. On Friday (5th Aug) they to Cleaboy to play De la Salle took the victory with an excellent showing.

Tramore came to the Burgery to play our division 5 team last Friday (5th Aug) in what was a very sporting game with lots of great passing and teamwork. The boys were ahead for a lot of the game and were unlucky to lose to a late goal from Tramore.

The U11 group as a whole are showing great signs of improvement which is as a result of the hard work and dedication shown by this group. Well done lads and keep it going!

Our academy continues every Saturday morning at 10am and it’s as busy as ever with blitzes and fun-filled coaching sessions.

The U10’s were hurling down in Ballyduff Lower on Saturday morning. They had great fun and played great hurling.

The U9’s had a coaching session this week but hosted Ballygunner last week. They continue to impress and played great stuff.

The U7 & U8’s welcomed Mount Sion and Naomh Brid to the field on Sunday morning in the glorious sunshine. It was lovey to see the field buzzing with six mini pitches on the go and load of young boys having great craic enjoying their hurling.

The U5 & U6 boys had a very enjoyable hurling session on Saturday morning in the astroturf. There was loads of fun games like “clear the decks” as well as a few mini matches and plenty water breaks! It’s great to see the enjoyment from our youngest members and to watch them develop into future hurlers and footballers for the village!