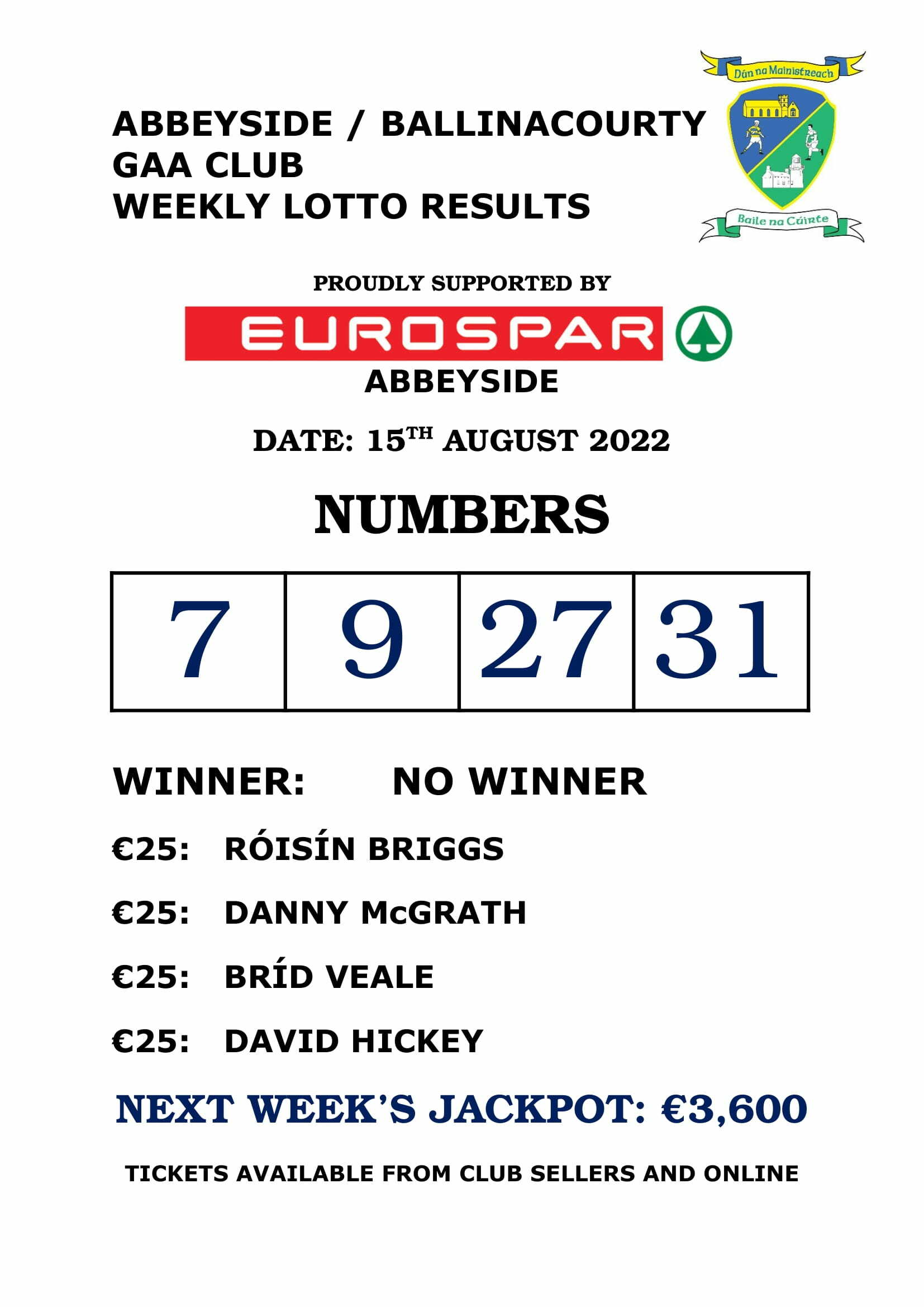 Our weekly lotto takes place on Tuesday night next. Next week's Jackpot will be €3,600. Tickets can be purchased from club sellers and by clicking on the following link - https://abbeycourtygaa.clubzap.com/categories/lotto/products

The Senior hurlers recorded their first championship victory this year when we defeated Tallow after a hard-fought encounter last Sunday afternoon in Fraher Field. Conditions on the day were less than ideal, with stifling heat enveloping the ground. It was tough enough going on the bank, so one can only imagine what it was like on the field of play. In a tit for tat first half Mark Ferncombe and Willie Beresford raised green flags to see us going in at the break with a 2 point lead. The 2nd half was a real battle after being reduced to 14 early on. But fair play to the lads they really dug in and in the end came away with a 3 point victory. The win secures 2nd place in the group and wins us the Division 2 League title. Next up is Dunhill in the provisional quarter final this coming Sunday.

The Junior B team were in action versus Fourmilewater last Friday evening. Whilst defeat was ultimately our lot there were very definite signs of progression. After a very disappointing result last time out the team put in a much-improved performance and pushed a very strong opposition all the way.

An Rinn provide the opposition next Friday.

De La Salle were the visitors to The Burgery last Wednesday for the latest round of the Division 1 championship. On a gorgeous evening for hurling there was a large crowd present and they were treated to a very entertaining game. Unfortunately in the end we went down to a four point defeat and we look forward now to the next game against The Brickies.

Heartiest congratulation to Stephen Enright and Emma Dempsey who were married last Thursday. We wish them all the best in their future life together.

Western Junior ‘B’ Hurling Championship Group B Round 2

Western Junior ‘B’ Hurling Championship Group B Round 3

The latest draw took place last week where we had one winner – Conor Tobin €100.

The next draw takes place on 7th September and once again we’d like to thank all our sellers and those who support the draw.

Correction: In last week’s notes a championship result between our U15 division 4 team and Tramore was recorded as a win for Tramore. Tramore actually couldn’t field a division 4 team so the match was conceded and the points will be awarded to Abbeyside.

The division 1 boys were in action last week against Lismore and were unlucky to lose by the narrowest of margins, while the division 4 team took the points in Gracedieu against De La Salle. Both our division 1 and division 4 teams have now qualified for the semi finals and will play Mount Sion and Ardmore respectively.

Our U11 hurlers have a busy week ahead. The division 1 panel have look forward to a visit from Mount Sion on Tuesday (16th) as well as an away fixture to Lismore on Friday (19th). The division 5 boys travel out to play Ardmore on Friday evening (19th).

Notwithstanding the intense heat on Saturday morning last the boys of the academy turned out in numbers. There was mighty craic and plenty skills involved so the cool refreshments afterwards were a total necessity – there may even have been a water-balloon thrown after training!

The mighty U9’s travelled to play Passage in a Déise Óg blitz and did really well.

Next Saturday morning promises to be another fun-packed morning at the field with the usual groups in action and the U8’s will be welcoming Ballygunner for a blitz.