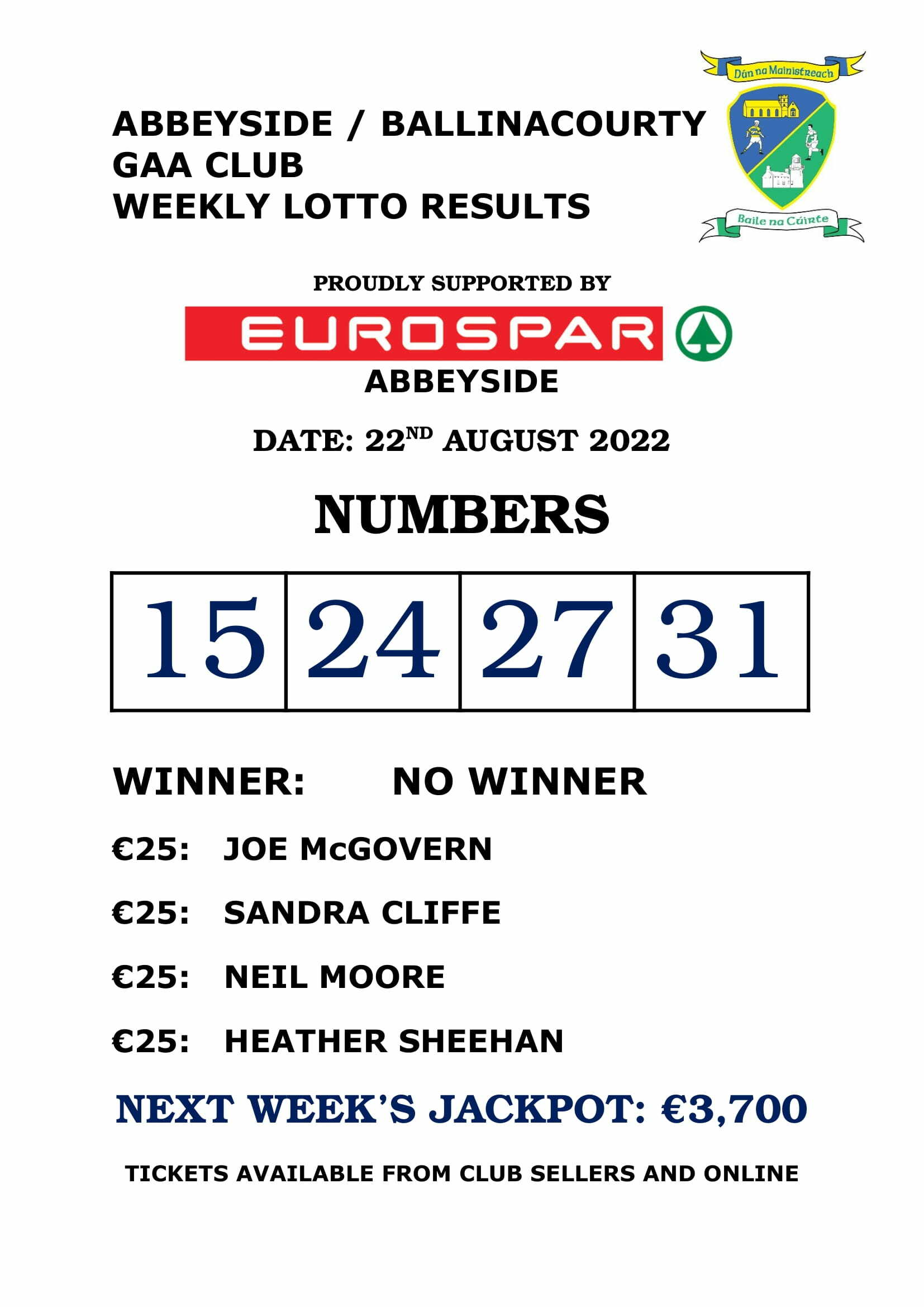 Our weekly lotto takes place on Tuesday night next. Next week's Jackpot will be €3,700. Tickets can be purchased from club sellers and by clicking on the following link - https://abbeycourtygaa.clubzap.com/categories/lotto/products

The Senior hurlers came through a tough battle with Dunhill last Sunday and we now face Roanmare in the County Quarter final next Saturday. Victory came at a high cost with another slew of injuries and we wish all the lads the very best in their respective recoveries.

The Junior B team played their final game last Friday when they were beaten by An Rinn. We’d like to thank all the players and management for their efforts throughout the year.

This Saturday the Junior A’s take on Kilrossanty in the Western Semi Final.

The Minors had a good win over The Brickies last Wednesday and now progress to the Plate semi-final where Lismore will provide the opposition next Wednesday in Fraher Field.

Western Junior ‘B’ Hurling Championship Group B Round 3

The field was a hive of activity during our recent Summer Camp with large numbers having a great time. We’d like to thank Michael O Halloran, Brian Looby, Seanie Callaghan, Eoin Kiely, Darragh Walsh, Rosin Tobin and Aisling Tobin for all their efforts and also to our 3 intercounty players, Michael Kiely, Neil Montgomery and Conor Prunty who visited.

Neither of our under 15 teams saw any action on Monday (15th August) as all championship matches were postponed at the last minute by Bord na nÓg, due to the risk of thunder storms.

The division 2/3 team take on Cappoquin in the Burgery on Monday 22nd.

Both U12 teams are on the road this coming Friday as they take on Stradbally and St. Saviours.

The U11 division 1 team had two tough challenges against Mount Sion and Lismore during the week. They lost out in both matches but continue to show good improvement and as they progress through the season.

The division 5 were very unlucky to lose out in Ardmore. They were two points up in injury time and Ardmore struck with a goal from a free to take the win by the narrowest of margins.

It was a typically busy week for our academy and after a good spell of hurling, our under 10s returned to football by taking part in the Dungarvan GAA football tournament last Saturday. The morning saw some exciting games played by the 15 teams involved, and the spectators got a great display of football by the young lads. Ballinacourty’s two teams put in solid performances to reach the cup semi-final and the shield semi only narrowly missing out in a place in both finals. Well done to all involved.

The field was busy on Saturday morning with the usual academy coaching sessions and the under 8’s welcomed Ballygunner for a hurling blitz. We had 32 boys so we fielded four teams who played very good hurling and competed very well with our friends from the east of the county. Well done to all.