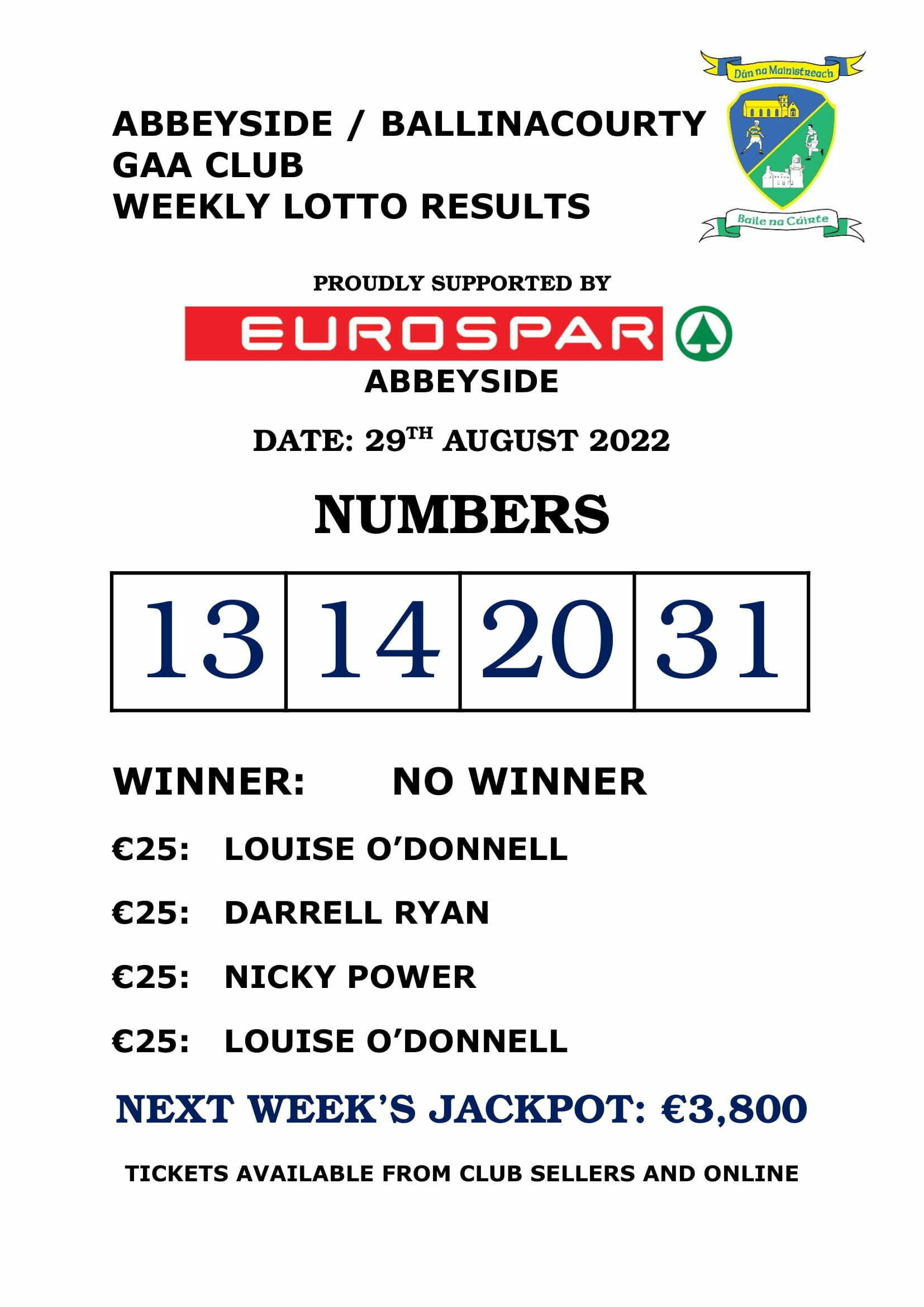 Our weekly lotto takes place on Tuesday night next. Next week's Jackpot will be €3,800. Tickets can be purchased from club sellers and by clicking on the following link - https://abbeycourtygaa.clubzap.com/categories/lotto/products

The Senior hurlers bowed out of the championship last Saturday evening when going down to a defeat versus Roanmore. It was always going to be a tough assignment, but the lads battled admirably. We regroup now and get set for the football.

The Junior A team just came up short in a rip roaring encounter against Kilrossanty last Saturday in the Western Semi Final.

The Minors had a good win over Lismore last Wednesday in their Plate semi final. We’re out again this Wednesday in the final, where The Brickies will provide the opposition.

Please note that this week our regular Sunday Night Bingo will take place in the CBS School. Eyes down at the usual time of 8pm.

On Friday last we lost of one of the great personalities of Abbeyside, the late Alice Marie O'Connor. For decades Alice Marie worked in O'Connor’s Bar which had been previously run by her late mother and subsequently her brother Michael where she endeared herself to literally thousands of customers through her unique warm and caring personality. Alice Marie had a keen and genuine interest in the lives of all her customers and would regularly ask how they were getting on, taking great delight in their successes, especially those on the sporting front, as Alice was a lover of all sports. This is of course no surprise as her brothers were fantastic sportsmen, with Johnny and Paddy achieving a notable double in 1948 when Johnny won a Senior All Ireland hurling medal and Paddy won a Minor All Ireland on the same day. The jerseys worn by her brothers hang proudly in the pub and the medals were greatly treasured possessions of Alice Marie. Outside of GAA, Alice Marie had a great interest in horse racing and greyhound racing, where of course her brother Johnny trained the winner of the 1973 English Derby, Patricia's Hope. The week of Cheltenham or the St Stephens Day racing in O’Connor’s were huge occasions along with many other race meetings and Alice Marie always took great delight when a local trainer or owner would have a winner.

As mentioned already the GAA was Alice's great passion and she loved travelling to Thurles or Croke Park to support the Waterford Hurling teams, returning home full of pride and delight when they won, especially if there was an Abbeyside player involved. O'Connor’s Bar has seen many great nights of celebration for our club down the years and Alice would insist on filling the County Cups, where refusing to take a drink could often mean getting some of it poured over your head!! It was all part of her great sense of fun and pride in the team's achievements. Alice always loved welcoming GAA people from near and far into the bar, especially the visits of those who hurled with and against her brothers aswell as players of more recent times. The music sessions of Paddy Joe Ryan and the craic and banter that went with them were a huge source of pleasure for Alice Marie.

Having spent her life working in the bar, it was indeed fitting that Alice Marie spent her final months at home in Sexton Street where the care she received from Brian and Kay were a great comfort to her. No doubt she was kept up to date with all the news by Jim Egan, her sidekick in O’Connor’s for as long as we can all remember.

Without a shadow of a doubt Abbeyside lost one of our great characters today. To Brian, Kay and all Alice Marie's relatives we send our deepest sympathies. Gan dabht ar bith ní bheidh a leithéid arís ann.

We’d also like to express our sincerest sympathies to the family and friends of the late James Buckley who passed away this week. James' sons Niall and Darragh are valued club players and both have helped the club to win titles in hurling and football. Our thoughts are with all at this difficult time.

The division 2/3 team recorded a convincing victory against Cappoquin in the Burgery last Monday (22nd August) while our division 4 team did not have a game.

Both U13 teams take part in county semi finals next week. The division 4 boys take on Ardmore and the division 1 team play Mount Sion. Keep an eye on social media for confirmation of the fixture and venues.

The division 1 panel made the short trip down the coast to play Stradbally last Friday and took the victory with a score line of 0-13 to 1-07. The division 5 boys travelled to Colligan to play St Pats in a challenge that was really well contested as they clinched the victory.