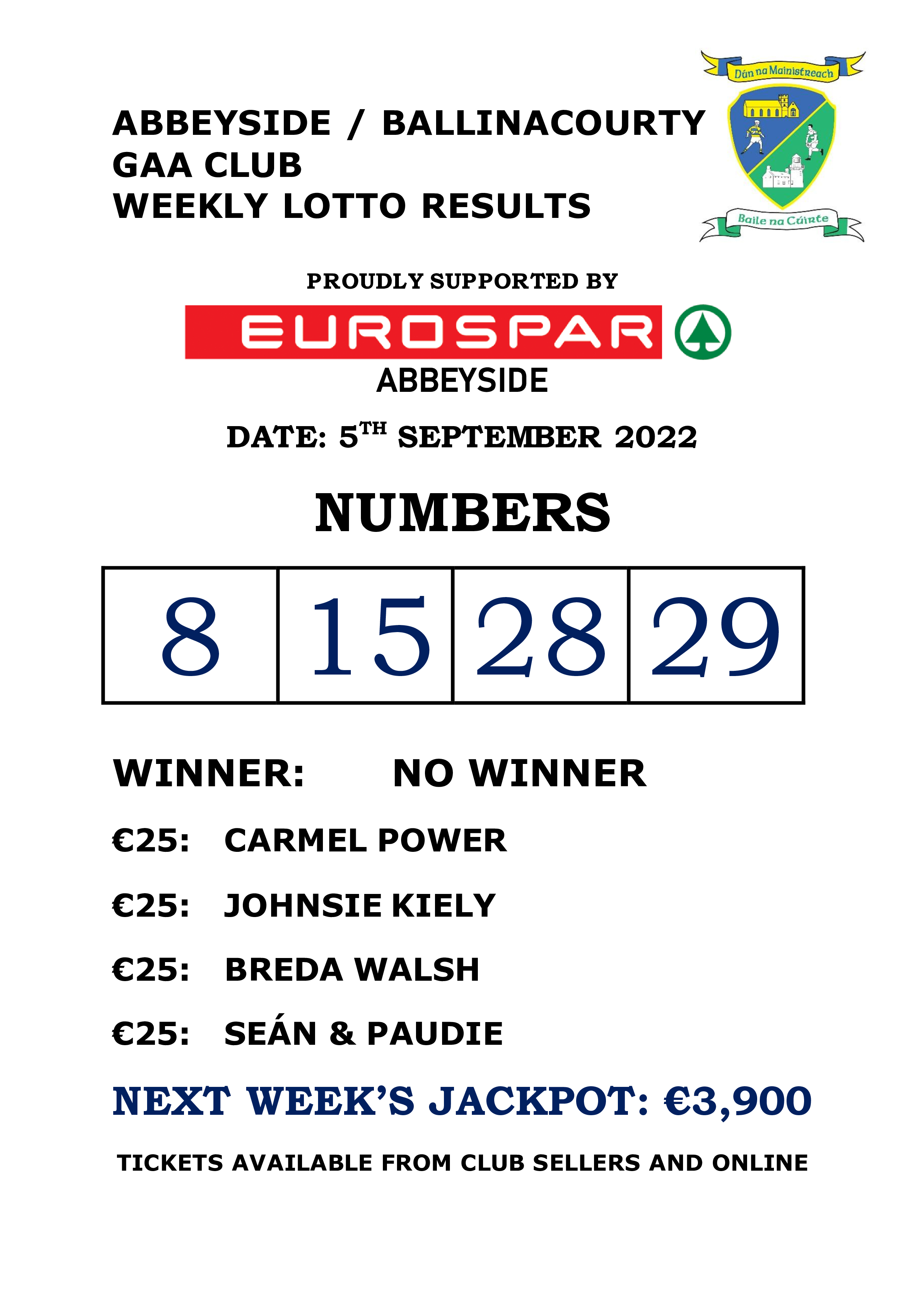 Our weekly lotto takes place on Tuesday night next. Next week's Jackpot will be €3,900. Tickets can be purchased from club sellers and by clicking on the following link - https://abbeycourtygaa.clubzap.com/categories/lotto/products

The Minor hurlers had a great victory over Brickey Rangers in the Division 1 Plate Final last Wednesday. All in all, the lads can certainly take some massive positives from their championship endeavours, and it is very encouraging to see a very definite progression in this group in the 2-year period since their U15 championship. There were some very impressive displays throughout the championship and with a bit more luck here and there we might well have qualified for the semi-finals. However, finding ourselves in the Plate presented a great opportunity to collect some silverware, and it was great to see the opportunity grabbed with both hands. Following victory over Lismore, we saved our best display of the year for the final where we dominated larger parts of the game and came away with an 11-point victory. Well done to players and management.

Attention, now turns to the big ball where Clan na nGael and The Nire provide the opposition this week as the football championship get underway.

Only one of our under 15 teams saw action at the weekend. It was the turn of our division 4 team, who played our neighbours Stradbally in the Burgery. They boys turned in a great display to take a convincing victory with a score line of 6-06 to 4-04.

The boys of the under 13 panel have been busy preparing for their county semi finals which take place this week. The division 1 team travelled to Carriganore on Monday (5th September) to play Mount Sion. The division 4 boys play Ardmore on Tuesday (6th September) at 6:45pm in Fraher Field. Please come out and support our boys!

There was no matches for the under 11 teams this week but they continue their preparations for their next round.

In the under 12 league the division 1 team hosted Lismore in the Burgery on Friday evening and after a shaky start that saw them concede an early goal, they rallied well to win by 4-08 to 1-04.

The other half of our under 12 group travelled to Ballybeg to take on St. Saviours on Saturday morning. They lost narrowly after a tough physical encounter but it was great to see the Abbeyside boys standing up to the challenge and show a “never say die” attitude.

Having recently switched to the big ball the under 9 panel played a blitz in the field on Saturday at midday. The visitors were Dungarvan, St. Mary’s and the Nire. Our lads played super football and had great fun in between the showers of rain – well done boys!

Our academy continues as usual every Saturday morning from 10am.

Congratulations to Jack Hurney, who plays with our under 13’s, on winning a Munster handball title on Sunday with his team mate Dara Gough.