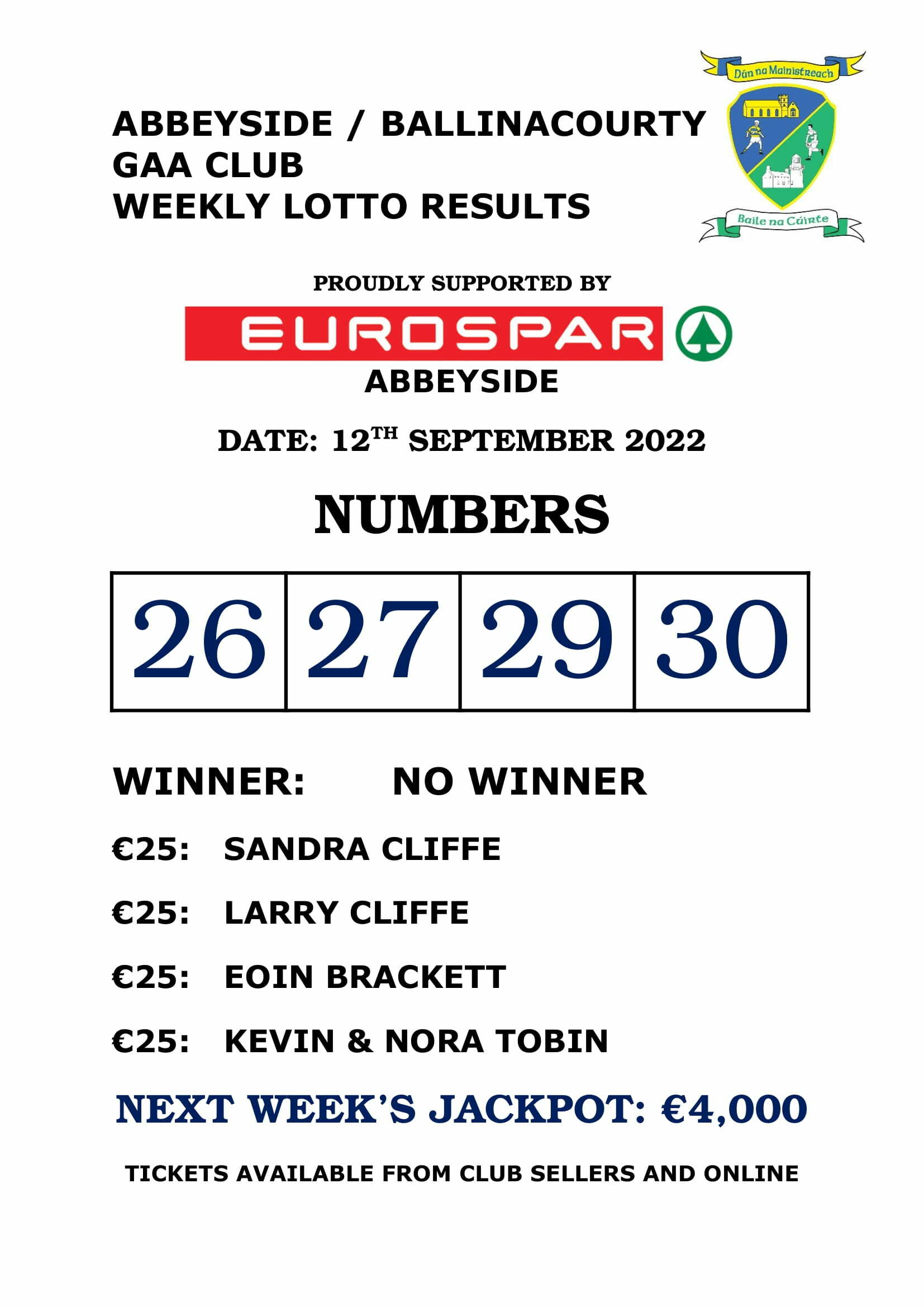 Our weekly lotto takes place on Tuesday night next. Next week's Jackpot will be €4,000. Tickets can be purchased from club sellers and by clicking on the following link - https://abbeycourtygaa.clubzap.com/categories/lotto/products

The football championships kick off this weekend with both the Senior and Junior A teams kicking off their campaigns.

Meanwhile the Minors had 2 games last week registering a draw against Clan na Gael and a very good victory over The Nire. This Sunday they travel to Gaultier for an 11.00 throw in.

Even an orange weather warning on Sunday couldn’t deter the boys of the U13 division 4 panel from turning on style to claim a well deserved county title. A determined St. Pats panel meant that our boys had more than the weather to worry about and both teams displayed great touch and striking in awful conditions. Abbeyside held a narrow lead at half time and St. Pat’s came out firing well early in the second half. The lads responded and upped the efforts and with the help of four goals, went on to claim the title for the village with a score of 5-08 to 1-05. Rory Mulcahy raised the cup on behalf of his team mates and spoke really well, thanking his coaches and St. Pat’s for a very sporting contest.

The other half of our U13 group were in action on Thursday evening in Carriganore in the division 1 county semi final, where they played Mount Sion in a fixture that was originally due to take place on the previous Tuesday. This really was an exciting encounter and the game ebbed and flowed as both teams wrestled for control. It was great to see such a high level of skill and work rate from a group of young boys but unfortunately, it was not to be for our lads. Half way though the second half there was only a point between the two teams but a couple of quick goals saw Mount Sion take a lead that the boys weren’t able to overcome. The disappointment after the game was obvious but the panel can hold their heads high. They will be in the mix for county titles again in the future, there’s no doubt about that!

The U13 championships have now come to an end and all the players, coaches and people involved with this group can look back on a very successfully year. Between the division 1 & division 4 panels, they’ve won three out of the four championships that they entered in hurling and football which is an amazing return. Just as important though is how enjoyable it was for the boys and how much they developed as a team and as individuals throughout the year. Well done to all involved.

Knockout hurling is fast approaching for both of our U15 panels. The division 4 boys have one match remaining in the round robin phase, travelling to Clashmore on Monday (12th). The division 2/3 team have a home quarter final on Wednesday (14th) against St. Mary’s with throw-in at 6:15pm. We ask all our members and friends to make an effort to get along and support both of our U15 teams in the coming weeks.

Neither of our U12 teams saw any action this week but the division 1 team travel to Ballygunner on Friday evening for the final match of the league section. Both the division 1 and division 5 teams have qualified for their respective semi finals and await the fixtures to see who they play.

Our U11 division 1 team played out an epic battle against Ballygunner on Friday in the Burgery. The hurling was fast and fierce and the match ended in a draw with impressive scoring of 1-10 a piece.

Our division5 U11 boys played Ballyduff Upper, and despite battling hard we lost out in the end.

Both U11 teams have shown great progress and improvement in their skills and teamwork throughout the year which is testament to their dedication and the guidance from the coaching team.

Saturday morning was busy as usual with boys from 5 to 10 honing their skills and having fun in the unseasonably warm weather. Plans are afoot for the mini All Ireland football competition

The U9’s gathered at the clubhouse before jumping on a bus to Castlecomer where they played Erin’s Own in a hurling blitz. The boys had great craic in all the matches that they played against a traditional hurling stronghold in Kilkenny and they represented the club very well indeed! These boys will have long playing careers ahead of them but it has also emerged that some could also have a career in the music industry based on the sing-song on the bus on the way home. Days like this are all about making memories with your team mates and building a team spirit, well done to the coaches for organizing.