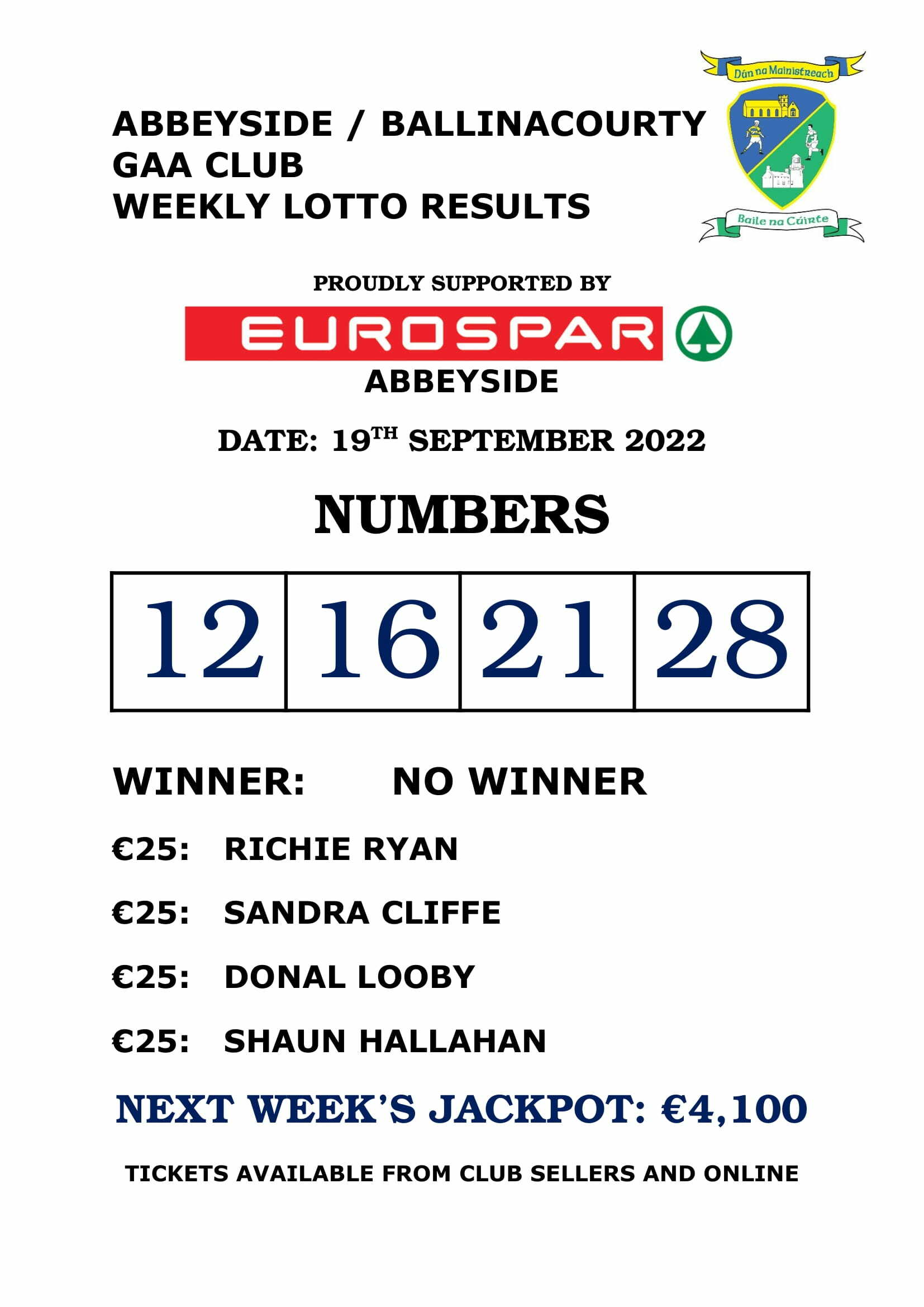 We had our Lotto draw last Monday with the results below. There was no jackpot winner. Next week’s jackpot will be €4,100.

Tickets can be purchased from club sellers and on our ClubZap at the following address - https://abbeycourtygaa.clubzap.com/categories/lotto/products

Our Senior and Junior teams made their respective championship debuts last weekend. The Senior team overcame a dogged Clashmore outfit on Sunday with some fine performances throughout the field. On Friday a very young Junior team unfortunately came up shot following a tight game versus The Geraldines.

Meanwhile the Minors continued their championship with a trip to Gaultier on Sunday where the hosts won by four points.

All the above are in action again this weekend with the Intermediates also entering the fray.

On behalf of all in the club we’d like to offer our condolence to the family and friends of Nell Dalton (née Hennebry). In particular her sister Carmel who is a current member of the club committee. Our thoughts are with all at this difficult time.

Our U15 boys had mixed fortunes in the knockout stage of the championship in the past week. Last Wednesday (14th Sept) the division 2 team played out an exciting encounter against a big physical St. Mary’s. The group team from mid-county pushed our boys all the way to injury time when a well taken free clinched the victory for the village lads with a score of 2-12 to 3-08. They now go on to play Sacred Heart in the semi final on Friday evening in Carriganore. Throw-in is at 6:15pm so please go along and give the boys the support they deserve.

On Saturday morning (17th Sept) in Cappoquin our division 4 hurlers bowed out of the championship in a hotly contested plate semi final against Clashmore. Having lost to Clashmore in the final match of the round robin stage the boys really upped their game and lead for good spells of the game. After a really great performance they sadly lost out by the narrowest of margins finishing on 0-09 to 2-02. This group can hold their heads high after putting in a lot of hard work through the season and showing great development as the season progressed. Well done to all.

Our U12 division 1 team travelled to Ballygunner on Friday evening to play the last game of the round robin matches in the county hurling league. The Abbeyside boys fought hard and played some great hurling but Ballygunner took the victory in the end by 3-08 to 1-07.

Both our division 1 and division 4 teams have made the semi final stages in the U12 leagues and both teams face De la Salle at the weekend.

U11 Tournament Victory in Cork

The U11’s made the quick switch from hurling to football last week and had only two training sessions before travelling to the outskirts of Cork city to take on some top quality competition in the annual Mick O’ Leary tournament, hosted by Glanbia Football Club. The tournament consisted of some of the top clubs around the country, including Cuala (Dublin), Lucan Sarsfields (Kildare), St. Finbarrs (Cork). This level of opposition didn’t deter the boys from Ballinacourty though as they topped their group, beating Valley Rovers, St. Finbarr’s and Lucan Sarsfields. They were drawn against the famous Austin Stack’s in the semi final and overcame the challenge with quality football and impressive work rate. The final saw the lads take on the hosts Glanmire and after a very tough encounter Ballinacourty claimed the victory and brought the cup back to our parish. This was a great achievement from this group and it’s well deserved after the dedication and effort that they have put in throughout the season.

Saturday was busy for our academy teams with the U7’s welcoming our neighbours Stradbally to the Burgery where they played loads of games in very well run blitz. The boys all had great fun and really enjoyed the games in the lovely weather.

Meanwhile, the U8’s made the trip to Tramore to play a hurling blitz against Micheál MacCraith Tramore and Ballygunner. The boys really enjoyed the games and competed very well with the eastern clubs and deserved the refreshments afterwards. We knew that U8’s were well able to hurl but they also showed that they have the makings of formidable choir. On the bus home they belted out the classics like “Up the Village” and “Everywhere we go…”. It was a great morning and was enjoyed by all.

Our academy continues every Saturday morning from 10am and keep an eye out in the coming weeks for the return of our Mini All Ireland Football series.