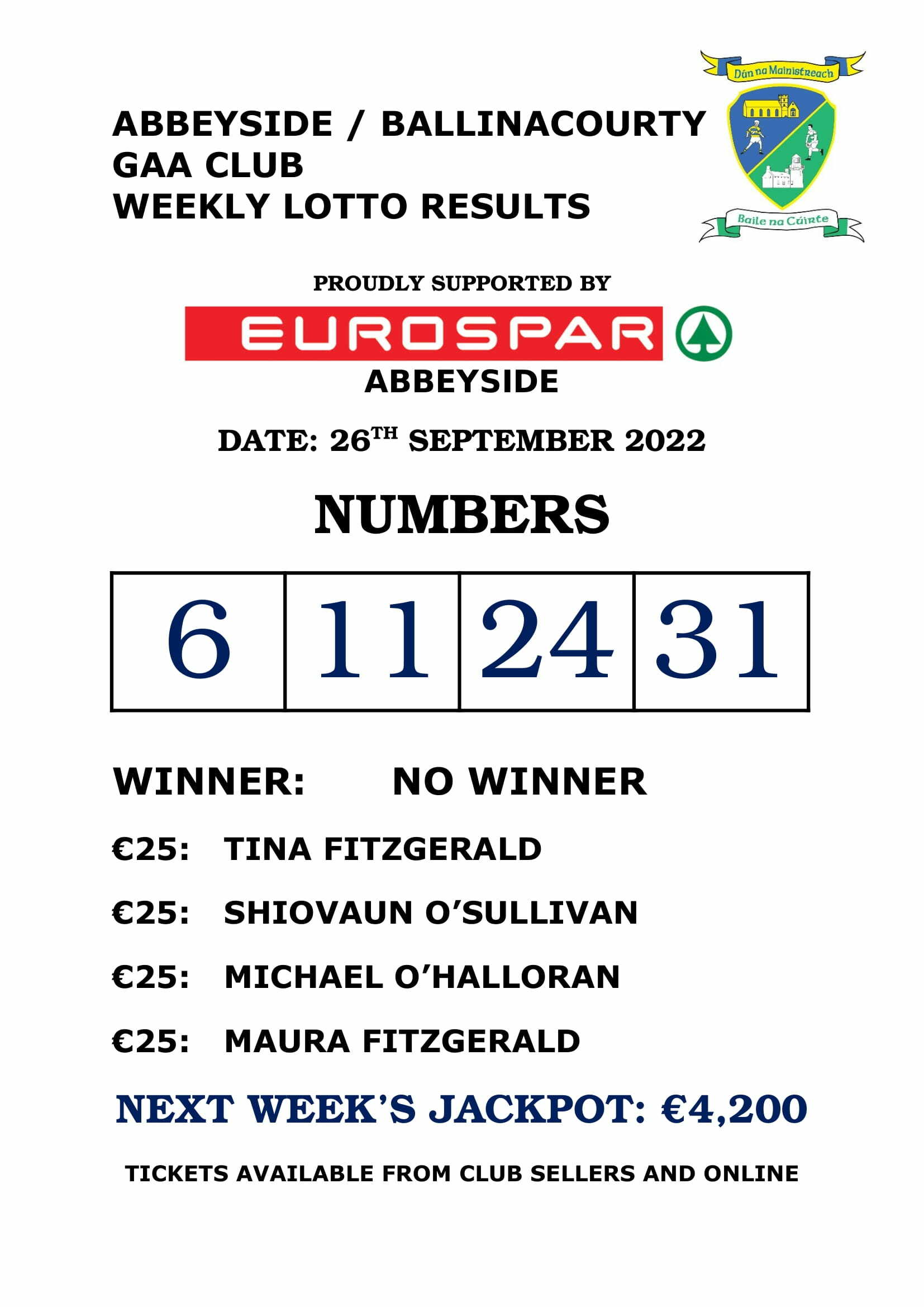 We had our Lotto draw last Monday with the results above. There was no jackpot winner. Next week’s Jackpot will be €4,200.

Tickets can be purchased from club sellers and on our ClubZap at the following address - https://abbeycourtygaa.clubzap.com/categories/lotto/products

All 3 Adult teams were in action last weekend. The Seniors registered a good victory over The Brickies on Sunday and are now qualified for the quarter finals which are fixed for a few weeks time.

The Intermediates began their campaign on Friday evening with a game against Colligan in Fraher Field. After a competitive game we came up just short. Next up is a local derby against Dungarvan on Friday.

On Saturday afternoon the Junior’s travelled to Colligan to take on Affane. After a slow start, we found ourselves 7 points down at half time having played with a strong breeze. The 2nd half performance was superb, and we managed to draw level entering injury time. Unfortunately, however Affane had one last attack which yielded the winning score. Defeat means we are now eliminated from the championship after 2 games. Many thanks to the players and mentors for their efforts.

Meanwhile the Minors continued their championship with a trip to The Brickies on Sunday where the hosts won by 7 points.

The division U15 division two boys overcame Sacred Heart last Friday (23rd Sept) in Carriganore to qualify for the county final. It was a tough physical encounter, but the Abbeyside boys fronted up and won in convincing fashion with a final score of 3:12 to 0-10.

Preparations are well underway for the U14 hurling and football championships. The championships are being run off quickly this year but none the less the boys will be line out and give it their all to take the titles. Best of luck to the players and coaching teams.

The U12 the division 1 hurlers played the county semi final against De la Salle, last Friday in the Burgery. They got off to a good start with an early goal and went on to take the victory with a score line of 3:17 to 2:03. The boys now have the county final against Ballygunner at 1pm on Saturday in Carriganore.

Hopefully we’ll have two U12 county finals to play on Saturday as Our U12 division 5 hurlers play their own county semi final, also against De la Salle, in Gracedieu on Monday (26th Sept). Keep an eye on social media for an update on how the boys got on.

As well as our usual Saturday morning academy sessions the U8s were on the road again as they travelled to Carriganore to play in a blitz organized by Déise Óg. It’s great for the boys to take part in these blitzes because it gives them the opportunity to play teams that they may not normally encounter.