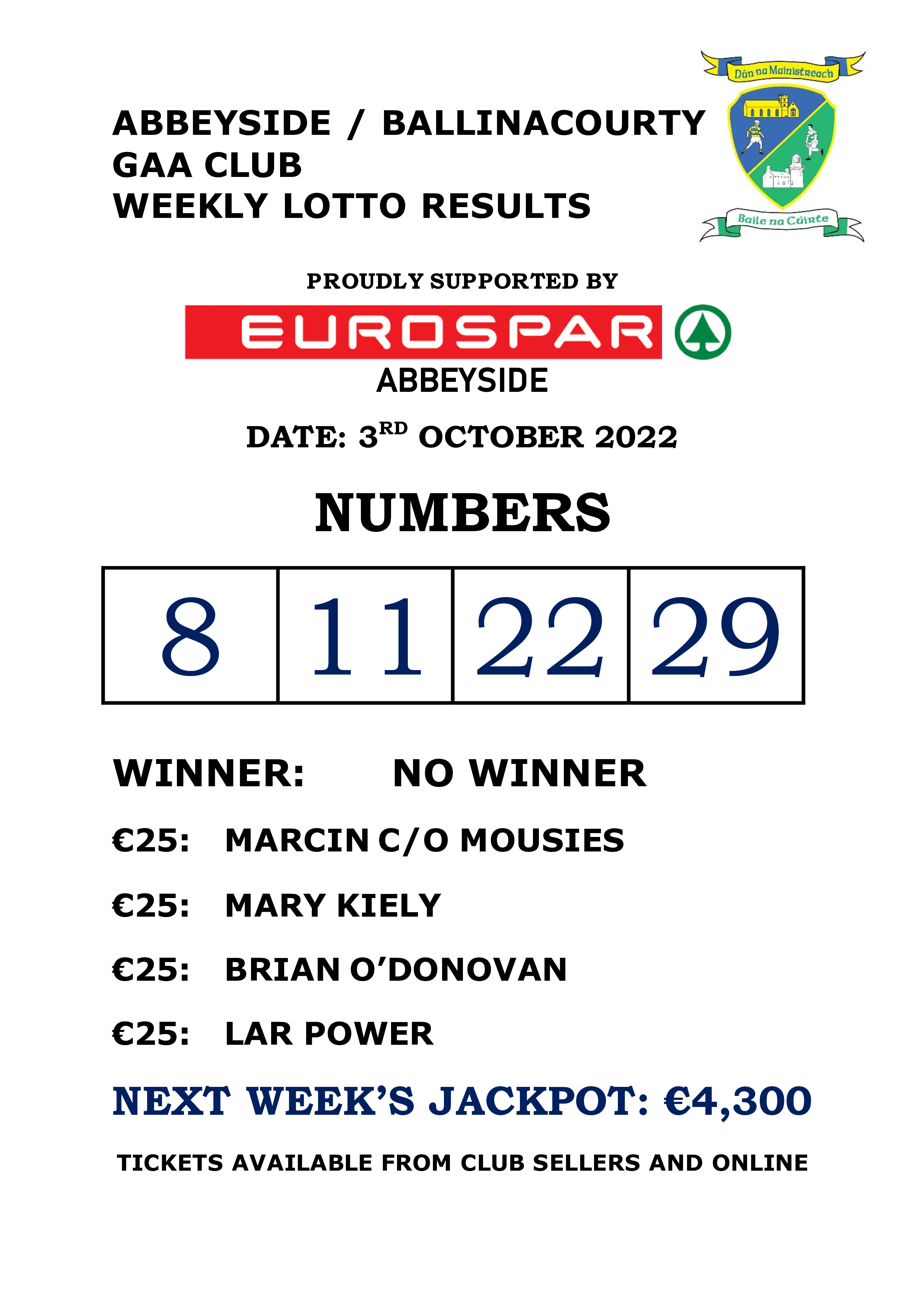 Our weekly lotto takes place on Tuesday night next. Next week's Jackpot will be €4,300. Tickets can be purchased from club sellers and by clicking on the following link - https://abbeycourtygaa.clubzap.com/categories/lotto/products

The Intermediate footballers went down narrowly to Dungarvan last Friday evening and now have 1 game left in the round robin next Saturday versus Ballinameela in Fraher Field at 7.00pm.

Meanwhile the Minors had a good win over Rathgormack in the field last Sunday and are now qualified for the knockout stages where we play Clan na Gael in Kilmacthomas next Sunday at 11.00am.

Our U15 hurlers had a fantastic victory in the division 2 county final against Clonea Power last Thursday (29th Sept) in Fraher Field. Throughout the football and hurling season these two teams have been nip and tuck with matches played at break-neck speed and intensity – this county final would not deviate from the norm. The first half was very tight and both teams had plenty goal chances but both goalkeepers were in top form, pulling off some outstanding saves. Clonea Power went in at half time with a slender lead.

The second half was a different story as the village boys dominated proceeding from the off. Work rate, team play and skilful hurling differentiated the two teams and Abbeyside kept the scoreboard ticking over with some very well taken points. Surging runs from midfield yielded goals as the boys took over and dominated play. This county title is the culmination of a long year of training and it’s nothing more than the boys deserve. Well done to all the players and backroom team!

Our U12 team travelled to Carriganore on Saturday to play the division 1 hurling county final against Ballygunner. The boys played into a stiff wind in the first half and Ballygunner picked off a few early scores but the Abbeyside boys showed great determination to get back in to the game and at half time Ballygunner lead by 0-09 to 0-05. Unfortunately in the second half we weren’t able to capitalize on the tailwind but the boys never gave up and battled out to the end. As you’d expect, the boys were upset at the final whistle but they did themselves, their families and the club proud. They will have the opportunity to play in plenty more county finals in hurling and football, there’s no doubt about that.

The entire U12 group have had a great year and they continue to develop as a team. They look forward to the 2023 season and will be as enthusiastic as ever.